Grenada and Bahamas at London 2012 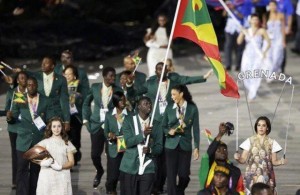 These super athletes who make it to the Olympics are a source of wonder and inspiration.

The medals table seek to show not individuals’ success but success by country.  China, USA, Russia and U.K. are always well represented.  I am amazed that in recent years we’ve begun to predict the number of medals we expect to win, partly based on the amount of money invested in the athletes.  Although this makes sense it seems so far removed from individual pursuit, motivation and endurance.

But what about the other end of the table where countries have tiny populations and very little money to invest in sports? The Bahamas and Grenada are two such places and they performed well above what might be expected.

The Bahamas, with a population of more than 347 000 won an Olympic gold medal for the men’s 4×400-metre relay team. I am sure the team were overwhelmed by all the attention at home and abroad.  It probably helps that there are four of them to share the experience together and take turns in the spotlight.  Being aged from 23 to 32 they already have some experiences of competitions and life so this could spur them on to their next achievements. 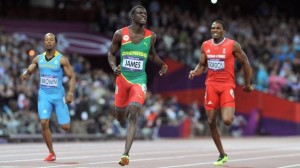 For Karani James (“The Jaguar”) of Grenada, he is the island’s first and only Olympic medal holder!  He won the gold medal by finishing the 400 meters in 43.94 seconds.  By doing so he brought Grenada, Carriacou and Petite Martnique to the attention of a whole new audience.  Karani, 19 at the time, showed humility and graciousness beyond his years.

I was lucky enough to be on the island when Karani competed for his medal and the place was alive with hope, expectation and excitement.  When he glided to the finish for the gold the place exploded into carnival celebrations.  It is amazing what effect his achievement has had on the island.  All ages and all classes feel a renewed sense of pride.

Grenada is the first of the OECS countries to have won an Olympic medal.  For an island state with 110, 000 people this is truly amazing.  Many people can connect with Karani’s can do attitude and demonstration of commitment.  With his humble beginnings he shows that it is not where you start but where you end up that matters.  The moment he exchanged numbers with the South African runner Oscar Pistorius he touched the hearts of many and demonstrated the generous heart of the Grenadian people.

For Karani and his family it has been a beautiful and overwhelming experience.  They have been guests of the Prime Minister and Governor General on several occasions.  My hope is that he can regain some of his privacy and enjoy the remaining time at university without feeling too observed or pressured.  He is capable of so much more but he needs time and space to continue to mature in his sport and as a person.

These young men are all role models.  They encourage all small states and their populations to believe that they can leave a mark on the world stage.  Having money and a large population increases a country’s chance but all is not lost without that.  I am sure that many people will be encouraged and I expect to see more of the same successes in Rio in 2016.  I can’t wait.